I’m always looking for ways to get more vegetables into my children. One will willingly eat carrots and sweet corn (but not baby corn) and the other will eat broccoli and any kind of corn. Both like baked beans but I’m not sure they really count. They are also weird with potato. They’ll eat it on top of shepherds pie, roasted or potato smiley faces (which are a safe option for us! How cool is that?) but look at mashed potato on their plates like I’m trying to poison them. I feed them fish cakes made with mashed potato and extra veg purely for my own amusement. I do a lot of crazy mummy laughing in my head when they demolish them!

I don’t have a set recipe as it’s a great thing to make with leftovers so amounts differ. Also I made enough for 8 hungry people last night (to feed 4) so I’m not really to be trusted with amounts.

Usually I make fish cakes with left over mashed potato, a tin of tuna, a tin of sweet corn and some gluten free flour. Depending on how seasoned your potatoes were you can add salt & pepper and lemon juice to the mix.

Last night I had a large cooked salmon fillet to use so I boiled 6 large potatoes in a huge pot till soft then mashed them with a splodge of Vitalite and some salt and pepper. I boiled 2 carrots and parsnips then blended them and mixed them into the mash. If you were using tuna this would not be a good way to hide carrot as the mix was a bit orange! When my daughter commented on the colour I said it was the pink salmon she could see….

I then added a cup of gluten free flour to the potato mix, removed the skin from the cooked salmon, flaked the fish with a fork and stirred it in. I seasoned with salt, pepper and lemon juice.

Heat a large frying pan on a high heat (I used 8 on my induction hob) with enough oil to cover the base.

Take the fish/potato mix by the handful and shape into a pattie. Could make smaller ones for little kids.

Coat the pattie in a light dusting of gluten free flour by sitting it on a plate of flour then gently turning it to coat the other side.

Place gently in the pan using a spatula to avoid splashing yourself with hot oil. Fry for approximately 2 minutes on each side until golden (also known as not too pale, not burnt). I cooked 4 at a time and prepared the next batch while they were cooking. 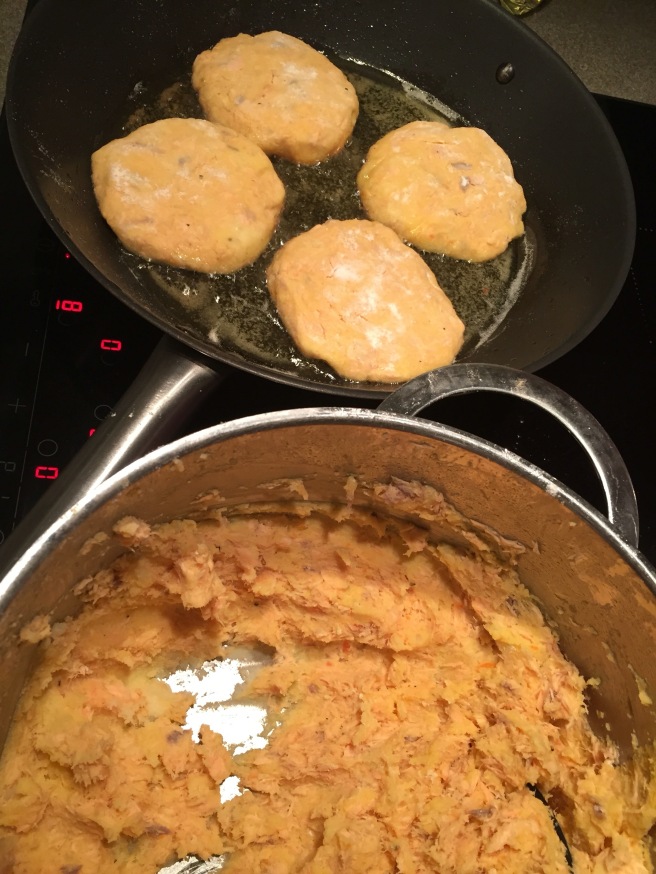 If you are making masses you can keep them warm in the oven till they are all cooked. Let them cool a little before giving them to children.

When it’s just me and the kids I serve the fish cakes with lemon juice and a big blob of tomato ketchup for dipping but we went posh last night since it was salmon and had extra veg. 2 fish cakes was ample for the kids. I ate 3 but would have been fine with 2! 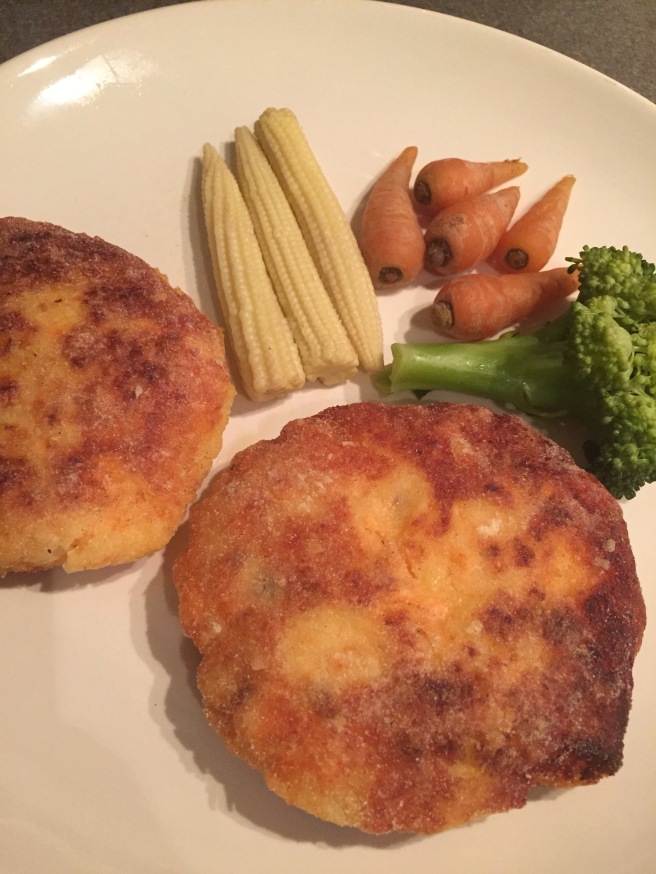